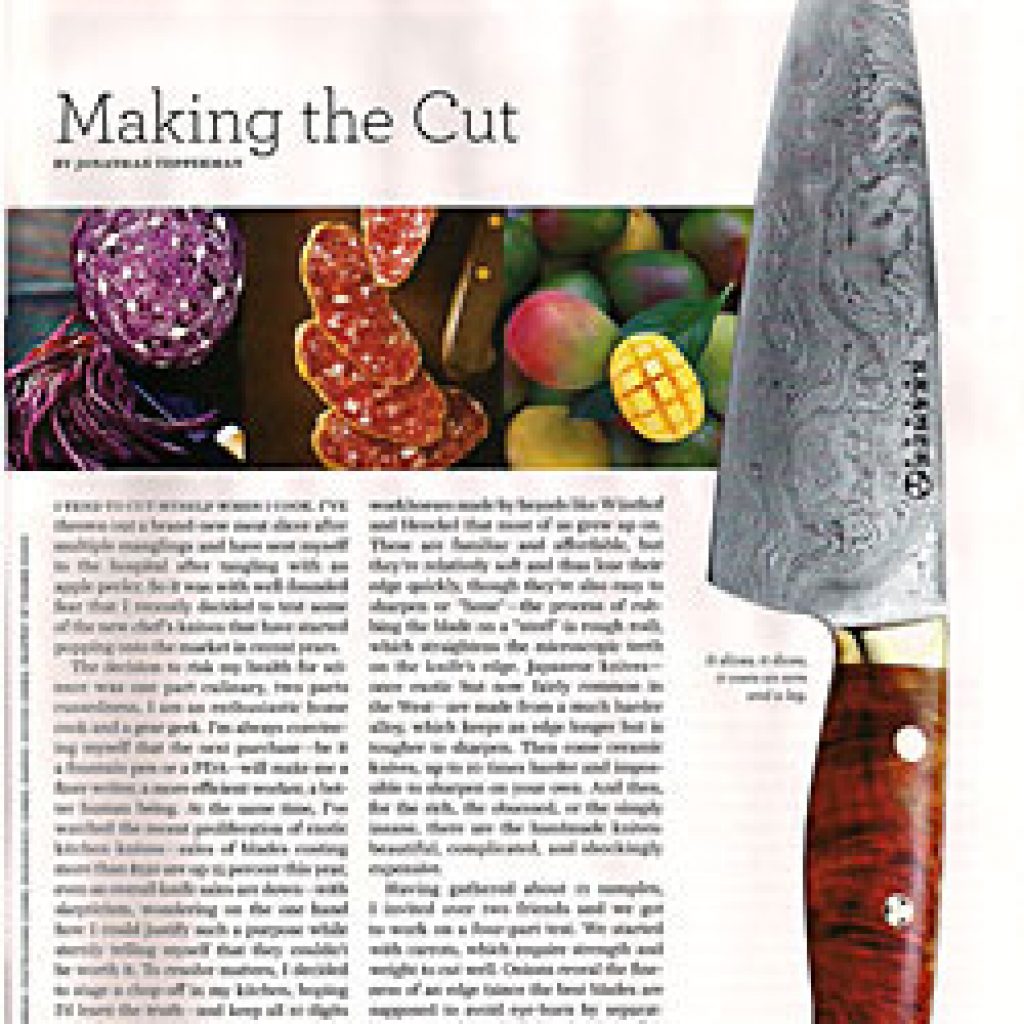 I tend to cut myself when I cook. I’ve thrown out a brand-new meat slicer after multiple manglings and have sent myself to the hospital after tangling with an apple peeler. So it was with well-founded fear that I recently decided to test some of the new chef’s knives that have started popping onto the market in recent years.

The decision to risk my health for science was one part culinary, two parts cussedness. I am an enthusiastic home cook and a gear geek. I’m always convincing myself that the next purchase-be it a fountain pen or a PDA-will make me a finer writer, a more efficient worker, a better human being. At the same time, I’ve watched the recent proliferation of exotic kitchen knives-sales of blades costing more than $150 are up 15 percent this year, even as overall knife sales are down-with skepticism, wondering on the one hand how I could justify such a purpose while sternly telling myself that they couldn’t be worth it. To resolve matters, I decided to stage a chop-off in my kitchen, hoping I’d learn the truth-and keep all 10 digits in the bargain.

Chef’s blades (I sampled only eight-inch knives) currently fall into four rough categories. There are the Germans, the workhorses made by brands like Wüsthof and Henckel that most of us grew up on. These are familiar and affordable, but they’re relatively soft and thus lose their edge quickly, though they’re also easy to sharpen or “hone”-the process of rubbing the blade on a “steel” (a rough rod), which straightens the microscopic teeth on the knife’s edge. Japanese knives-once exotic but now fairly common in the West-are made from a much harder alloy, which keeps an edge longer but is tougher to sharpen. Then come ceramic knives, up to 10 times harder and impossible to sharpen on your own. And then, for the rich, the obsessed, or the simply insane, there are the handmade knives: beautiful, complicated, and shockingly expensive.

Having gathered about 12 samples, I invited over two friends and we got to work on a four-part test. We started with carrots, which require strength and weight to cut well. Onions reveal the fineness of an edge (since the best blades are supposed to avoid eye-burn by separating, not crushing, individual onion cells). Tomato skins are tricky for any non-scalloped blade to get through without smushing. And raw meat (I used bison) requires a knife to slip through its fibers without mashing the fillet flat.

Out of curiosity, the testing team turned first to the ceramics. Popularized by the TV chef Ming Tsai, these knives are alluringly strange: one friend picked up the white, feather-light Kyocera Revolution ($89.95; amazon.com) and declared it the iPod of kitchen tools. It functioned like an iPod, too: adroit but delicate. The Revolution made short work of a tomato, encountering so little resistance the fruit felt presliced. And it did just fine with the bison. But its lack of heft gave us problems on the carrots. And because these knives are brittle, they can chip if dropped (a problem for the clumsy-you know who you are) or crack if bent wrestling with bones or heavy foods. Ignoring the maker’s injunction to avoid these, I set to work on a block of cheese and some hard sausage. The Revolution didn’t snap, but it struggled.

So did Kai’s Michel Bras blade ($425; williams-sonoma.com), shaped in the increasingly popular Japanese Santoku style, which has a tip that curves down. With its straight black grip and smoked matte finish, this knife glowed with sexy malevolence. Forged in the sword–making town of Seki, Japan, it functioned like a samurai’s blade-which is to say, it was awkward as hell in the kitchen but might do well in a duel (I didn’t have the courage to find out). The handle lacks an ergonomic curve; the blade lacks the arc that lets you rock a traditional Western knife when mincing, and the edge, wicked as it looked, brutalized my tomato. If the Kyocera is the iPod of knives, this is the Microsoft Vista: a pointless design innovation driven by a big ego (Bras is a French celebrity chef) that looks slick but performs worse than the original. Something similar can be said of Japan’s Global knives: sleek, attractive, modern-looking steel-handled cutlery that are so awkward and slippery one friend refused to even try one, convinced she’d poke out an eye.

There was no such frustration with the handmade knives of Bob Kramer, a chef turned sharpener turned blacksmith who has emerged as the dean of independent American knife makers in the past decade. Kramer makes his top blades in his Oregon smithy using an ancient, recently rediscovered Persian sword-making technique that involves mixing and folding together different alloys of metal. This trick produces Damascus steel, which has a striking, swirled pattern and properties extremely well suited to battling Crusaders. Its exact utility battling crudités is less clear, though its beauty is intoxicating. I’d been fantasizing about getting my hands on a Kramer since first reading about them several years ago, and my first sight of one in my kitchen, after opening its elaborate wooden box, induced a feverish, Gollum-like lust in my soul. Still, these babies go for $1,600, and I was sure they’d never merit that price tag. I believe in a Culinary Law of Diminishing Returns: a $30 bottle of wine is often twice as good as a $15 one, and the progression holds up to about $100 or so. But no $400 wine is four times better than a solid $100 bottle. By the same logic I was convinced that Bob’s blades, lovely though they are, wouldn’t prove a full 16 times better than the control in my experiment, my own Wüsthof Classic ($100; amazon.com).

After five minutes I decided I wasn’t so good with numbers. This knife was like nothing else I’ve ever handled-unbelievably well balanced, with an extra-fat boxwood elder grip that just feels deliciously … right. I’ve never wielded a lightsaber, but I imagine the experience is somewhat similar. Every time I picked it up, I chuckled with delight. The vegetables effectively diced themselves. The knife slid through raw meat without compressing-or even seeming to touch-the flesh. Slicing a hard French saucisson for my guests, the blade wedged itself into my wood-cutting board. And as I was drying it after use (the steel is carbon, not stainless, so it starts to oxidize within minutes of exposure to moisture), it severed a dish towel.

But does this mean I’m ready to shell out such serious cash? (That’s assuming I even had the option; Kramer’s backlog is so long he no longer accepts new orders). As I write this, with two bandaged fingers, I’ve just about decided that the answer must be no. For one thing, you can get a very close mass-produced approximation made by Shun at Kramer’s direction ($339; surlatable.com) that feels and performs remarkably similarly. For another, much as I may covet these high-priced beauties, I’m still not willing to abandon the Wüsthof that has served me loyally for 10 years. Its blade may not be handmade or space-age. But the grip feels like home, the weight like an old friend, and the arc is unsurpassed. I still suspect that dropping a king’s ransom for a spectacular new knife might vault me from culinary competence to demigodhood. But in times like these, a comfortable, mortal blade-especially at $100-feels plenty good enough. 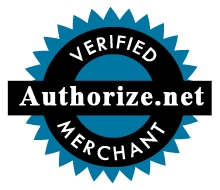 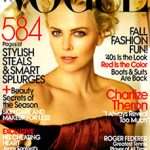 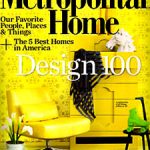